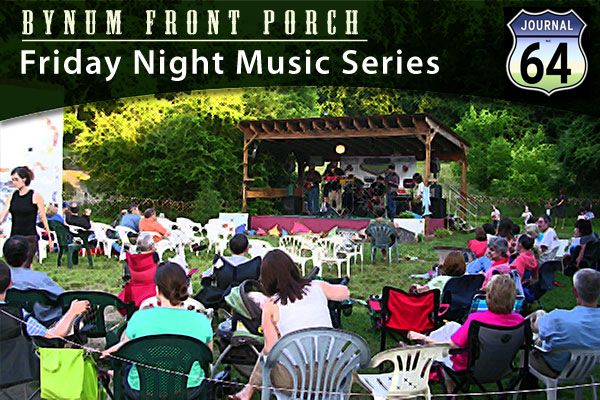 The charm of Bynum is easy to describe – it’s like a trip back in time.

Families and couples, young and old, sit on lawn chairs outside the old general store. The stage is small and the crowd would fit in one corner of Walnut Creek. There’s no gate, no street lights and no admission. At Bynum, they pass the hat.

You really feel like you’re in the backwoods at Bynum, but it’s right between two of the anchors towns in the western Triangle.

That’s because Bynum is tucked away behind 15-501 where it crosses the Haw River. It is literally ten minutes from Chapel Hill or Pittsboro.

Info from BynumFrontPorch.org. Check their website for more details and updates. The Friday Night Music Series is made possible by the Chatham Arts Council.

May 27 – Dmitri Resnik & Bootleg Beat with Special Guests Chatham County Slim and Papa Mike. Dmitri Resnik, a musician from Chatham County, began playing guitar at 16 and has been playing professionally for over 20 years.  Once a resident of New Orleans, he has released six CDs and has received multiple Real Blues Magazine awards.  Resnik plays roots, rhythm and blues with a nod to 1950’s rock n’roll, Louisiana roadhouse grooves and swing. Chatham County Slim and Papa Mike are a father son duo who play Piedmont blues, roots and old-time music.

June 3 – The Hotwires – Self-described left of center bluegrass sound that’s hip, yet refined and tips a hat to the orginal masters of the art.

June 17 – Bethesda Bluegrass Band – The Bethesda Bluegrass Band is a dynamic group of young musicians who carry on the tradition of bluegrass music for the next generation.  Hagwood brothers Caleb, Jackson and Connor along with Holly Riley and Virginia Groover take it away on fiddle and guitar and add tight vocal harmonies to the mix.  Hailing from Durham and Franklinton, these young musicians provide a family-friendly show that is sure to impress.

June 24 – Kairaba! – Kairaba! is composed of Senegalese “griot” musicians Diali Keba Cissokho and Sidya Cissokho, with North Carolinians John Westmoreland, Jonathan Henderson, Austin McCall, Will Ridenour and Hilary Stewart.  Born into a rich ancestry of Manding griots (the musician caste), Diali has been playing traditional West African music on the kora, the 21-stringed African “harp-lute” for as long as he can remember.  The band formed after Diali moved to North Carolina and began to look for musicians who shared his passion for creating music based on Manding tradition, flavored with local and personal styles.  The outcome of this collaboration is an infectious West African sound, which crosses cultural boundaries, with lyrics in Manding, Wolof and English.

July 8 – The Lizzy Ross Band – Bringing a fresh, new attitude with original tunes that hearken back to the era of rock n’roll, the Lizzy Ross Band fuses jazz and folk music with dirty blues and rock.  Ross’ commanding, versatile, and expressive voice has been compared to Grace Slick, Janis Joplin, Joni Mitchell, and Grace Potter. The band’s tight arrangements are tasteful and unique, ranging from subtly complimentary to virtuosically explosive.

July 29 – The Bluegrass Experience – The Bluegrass Experience has been a vital force in the North Carolina/ Southeastern Bluegrass scene for over 30 years.  Since being named the World’s Champion Bluegrass Band in 1972, the group has performed professionally throughout the eastern half of the US and has appeared on many major festivals, done numerous college concerts, recorded three albums and appeared at The Finnish National Folk Festival.  Members have worked or recorded with some of the greats of the genre including: Bill Monroe, Chubby Wise, Bobby Hicks, Jimmy Mills, Roland White, Wilma Lee Cooper, Gene Wooten and many others.

August 5 – Craicdown – Craicdown is a fun and entertaining band performing acoustic roots music with a high-energy, rock inspired flare.  The band’s diverse repertoire features songs and instrumental pieces varying in style from Americana to reggae-sounding vocals, and from Celtic jigs and reels to the music of Brazil.  Craicdown draws from both traditional sources as well as writing much of their own material. Craicdown has recently released their debut CD titled “Roads”, which journeys into the wellspring of Americana and world music.  The band’s name is a play on the English and Irish term “craic”, which means fun, amusement and a good time.

August 12 – ourwood Mountain Band – This band centers its music on bluegrass and bluegrass gospel.  From to time to time they reach back in the classic country attic, pull out an old standard and arrange it as a bluegrass number or throw in a progressive number but by and large their music is traditional.

There’s lots going on at the Bynum General Store in addition to Friday Night Music.

Front Porch Pickin’ takes place every second and fourth Saturday each month from 10:00 a.m. to 2:00 p.m. The picking is a bluegrass jam session open to musicians and singers of all skill levels and ages. 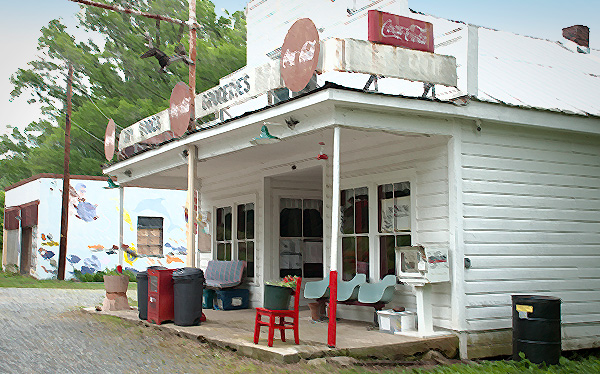 Hike to an Airplane Crash in North Carolina