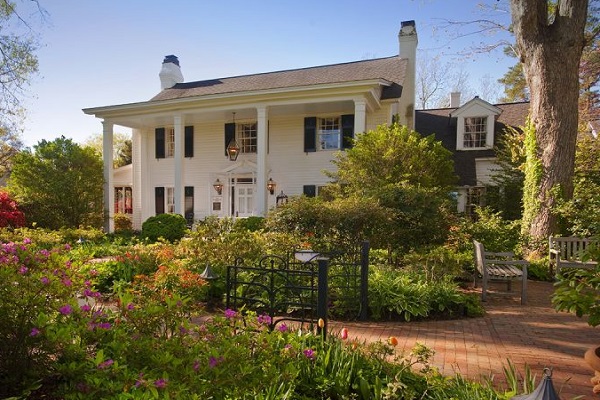 Chatham County is a great place to live for many obvious reasons – low cost of living, close access to the Triangle, plenty to do. Still, here are 10 great things about Chatham that may be a little less obvious.

The county is rich with historic names. “Chatham” comes from the Earl of Chatham in England, who was more commonly known as William Pitt … which explains where Pittsboro got its name. Jordan Lake, which sits on the eastern side of the county, is named for Benjamin Everett Jordan, a former United States senator from North Carolina.

2. SOLD! To the Gentleman in Yellow

Siler City still has an operating stockyard auction house, run by the Carolina Stockyard Company. And yes, they do auction livestock.

3. There’s a Superbly Classy Side

The Fearrington House Inn and Restaurant, which sits in Pittsboro, is one of only two Five-Diamond rated hotel and restaurant (ratings by AAA) in the entire state. While you’re there, you can savor a range of restorative treatments offered at the spa, enjoy a craft beer under giant oaks at the beer garden, or browse boutique shops that include an independent bookstore.

4. It Has a Long History as a Tourist Destination

Moncure once served as the western-most inland port in the state, linked all the way to the coast by steamships. Those steamships often brought tourists from the coast escaping the heat and mosquitoes of summer. They often stayed in Pittsboro, which was a resort destination during this time.

Today, tourists can enjoy the Fearrington House Inn (above), the Carolina Tiger Rescue, Jordan Lake, and a plethora of art shops and local restaurants in downtown Pittsboro.

5. Pittsboro Has Been Around Since the 18th Century

In fact, British General Charles Cornwallis camped in Pittsboro during the Revolutionary War.

6. Pittsoboro Contested With Raleigh and Chapel Hill for Iconic Landmarks

Pittsboro was once considered as a potential site for both the University of North Carolina, the oldest public university in the United States, and the state capitol. Now, both sites are less than an hour away – UNC-Chapel Hill sits just to the north, and the state capitol sits slightly to the east in Raleigh.

7. They Have Their Own Currency

Some citizens of Pittsboro have revitalized a local form of currency called the PLENTY (Piedmont Local Economy Tender), which was created in 2002. In 2009, local banks exchanged it at the rate of $9 for every $10 of PLENTY. Like other local currencies, the PLENTY is legal as they don’t too closely resemble United States currency. Transactions conducted with Plenties are taxed just as transactions in United States Dollars.

8. You Can Go to Church on the Lake

Every Sunday throughout the summer, beginning with Memorial Day weekend and ending with Labor Day weekend, a church service is held at Bonner’s Point on the western side of Lake Jordan. The service begins at 8 a.m. and is hosted by Trinity Episcopal Church in Wetumpka. Different area ministers are invited to preach each week. Sitting on the stone amphitheater singing, while looking out at the still lake is a not-to-be-missed Sunday morning experience.

Siler City is also the hometown of Frances Bavier, an American actress well known for her role as Aunt Bee in “The Andy Griffith Show”.

10. There Is Still More History

The downtown business district of Goldston is registered on the National Register of Historic Places. The town is, also, home to several historic homes. The town is named for the Goldston family who founded the town.